History of Microfilm Imaging Innovations – Bridging the Gap: How We Made Physical Media Compatible with Digital Devices

For the better part of a century, microfilm was the dominant method of preserving important records, and it’s estimated that well over a trillion documents were archived onto film or fiche during that time. Our company, Digital Check – then known by the names Microseal and Electro Optical Mechanics – had a hand in this, making products that captured and stored microfilm and fiche for more than three decades. History of Microfilm

When personal computers first started hitting the mainstream, it kicked off an awkward period for microfilm. The PCs of the 1980s weren’t yet powerful enough, and hard drives weren’t yet big enough, to take over the bulk data storage role occupied by film – but we could all see it coming.

How long would it be until computers displaced microfilm? Nobody knew. It wasn’t going to be a “clean” transition, either – there was no magical inflection point at which digital storage would become the universal standard used by everyone. It would happen slowly, as computing technology became more cost-effective and business cases for it changed. For almost 20 years, companies in the microfilm business labored on, making, and improving upon products that were still needed, all the while facing an uncertain future.

In fact, some of the best and most innovative film technology of all time was developed during what most people consider the “decline” of microfilm. As late as 1989, we were designing new products such as the DocuCopy devices – which were essentially small office photocopy machines, except they copied documents onto microfilm instead of a second piece of paper. Nonetheless, the writing was on the wall, and as inexpensive digital scanners began making their way into the market in the 1990s, demand for film capture steadily dried up. Our own company sold its microfilm-capture division in 1994, and shortly thereafter changed its name to Digital Check, after the check scanners that we had recently begun producing.

As you know, however, microfilm wasn’t done by a long shot. Less and less of it was being produced as the years passed – but overwhelmingly, what was already on microfilm, stayed on microfilm. A century’s worth of documents and historical records still needed a way for people to read them and bridging the gap between analog and digital was also becoming important. Microfilm and fiche hadn’t gone away; the type of microfilm technology that people needed had just changed. Instead of creating film, they needed better ways to read it or convert it, in ways that were compatible with the digital age. Even during this “gap” when Digital Check was not in the microfilm business directly, we were still involved with the manufacture of cameras and document scanners under contracts with other major electronics firms. 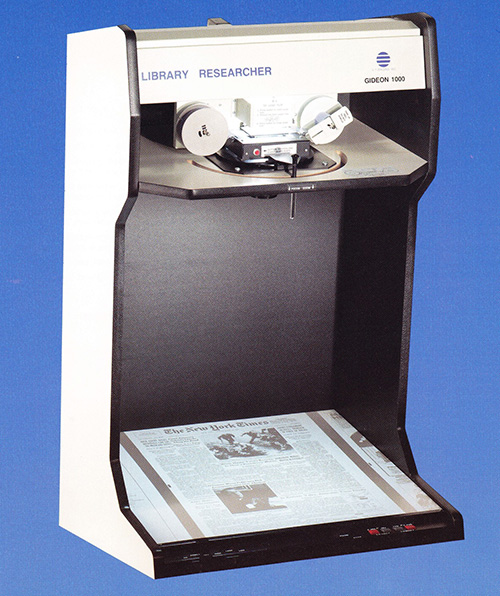 What got us all the way back into the game was a problem that had been slowly creeping up throughout the ‘90s, until it represented a major headache by the turn of the millennium: The digital/analog divide had simply grown too big to ignore any longer. As anyone who visited a school or a library around that time can tell you, the predominant method of reading microfilm was still a manually operated, “dumb” analog reader that projected the contents onto a backlit screen. If you were lucky, the projector could print out a paper copy of the document that you could take with you. Even though most newly created documents were being saved electronically, that remained the standard for accessing old ones well into the 2000s – you’ll still find them used in some places.

As PCs came into use in virtually every office in the world, though, the issue of interoperability was put front and center. The cumbersome process of manually digging through film and fiche stuck out like a sore thumb – it simply didn’t work very well when everything else around it was electronic. There had to be a better way.

As it turned out, Digital Check’s exit from the microfilm business only lasted five years. In 1999, we acquired ST Imaging, the manufacturer of a new kind of digital microfilm technology that we hoped would change the industry for good.

Digital cameras are so ubiquitous in 2020 that most of us probably don’t remember their complete history – they just are. But the mid-1990s were really the period when digital cameras transformed from unwieldy prototypes into functional, accessible mass-market devices. Granted, those early consumer-grade cameras were still expensive and primitive by today’s standards – think 1 or 2 megapixels and price tags near $1,000 – but they opened the door to all kinds of other specialized commercial and industrial purposes that would change the world.

ST Imaging’s ST200 reader was one of the first microfilm readers to display the film using a digital camera, rather than simple light projection. That rendered it a lot more complicated (and of course, more costly) than a “dumb” projector, and even though we used the best cameras available at the time, it’s still arguable that the resolution on those early machines was not that much different from straight projection. But – and this was a big BUT – it could save frames of microfilm as computer files, which changed the rules of the game entirely.

Since those early digital days, we’ve upgraded to the ViewScan series of microfilm scanners as digital cameras have become more powerful. The current ViewScan 4 checks in at 18 MP, rendering images that are virtually indistinguishable from the full-sized original. In fact, with today’s digital microfilm readers, the size of the monitor displaying the image is usually the limiting factor for readability!

Besides just higher-quality pictures, PCs and software have come a long way since the early 2000s also, so it’s possible to do a lot more with the images from the reader than it used to be. If you were working on a research project using an old analog projector, you probably would’ve done anything to be able to automatically search a frame for certain words, or save pages in memory so you could easily pull them up without going back through the roll.

The ability to harness the power of the PC to do tasks like this has improved drastically over the past two decades, and we expect this is where many of the most noticeable improvements will happen in the future. The cameras and mechanical parts of microfilm readers are already approaching the point where, even if they keep getting better, it might be hard to notice much difference. But adding more capabilities for reading, editing, and image manipulation offer possibilities that are almost limitless.

In many ways, though, digitally reading microfilm is only a halfway solution. Especially with very large collections, locating and reading the right roll is still very much a manual process; and with physical media, there is always the danger of losing information to the “three Ds” – damage, deterioration, or disaster. And all the information on those rolls is definitively offline. Until someone completes the act of reading it, there is no way of even telling what is in it, in more than a general sense.

For the long term, the only solution is conversion – not making digital versions of film and fiche as they’re scanned one-by-one but capturing the entire collection to digital format in bulk. That’s a much different kind of task: When you’ve got 10,000 rolls of film or more, and 1,000 or more frames on each roll, that’s 10 million+ images in total – no job for a library scanner. Conversion projects need a different kind of machine, built specially for high speeds and long durations of use. History of Microfilm

That was the reason we acquired nextScan in 2015, bringing the capability to cover both sides of the digital microfilm world. The finely tuned machines designed at nextScan have been developed by engineers with decades of experience. In order to capture whole collections, you will need a scanner with precision, capable of capturing data in milliseconds and at thousandths of an inch detail – so in many ways, the closest thing nextScan resembles is an engineering firm.

The big challenge in film and fiche conversion is matching each customer with a device (and a plan) that fits their situation. For the customers with big collections, it’s a pretty straightforward cost/benefit analysis; however, with the smaller and medium-sized ones, if there’s nothing that’s the right size or the right price point for you, it’s easy to put it off another year. Much of our effort since 2015 has been focused on creating devices that are flexible and affordable for the people in those situations – so they can convert their collections before it’s too late. History of Microfilm

It’s been a long road from the heyday of microfilm, to the turning point to digital, and back down the other side, where physical film and fiche are being converted to digital. There’s still quite a way left to go, though: Of all those trillions of documents that were stored on film, most have never touched a digital reader – so we’re closer to the start of that digitization process than the end. For as long as there’s film in the world to read, nextScan, ST Imaging and Digital Check, will be there with a way to bring it into the digital world. History of Microfilm

Read the Rest of the Digital Check Story...

PrevPreviousWorkflow For a Reason: Understanding the Process of Microfilm Conversion
NextThree Industry Shifts that May be Driving Demand for Microfilm Digitization in 2021Next