Microfilm Imaging – A Legacy Of Innovation Preserved Through Time 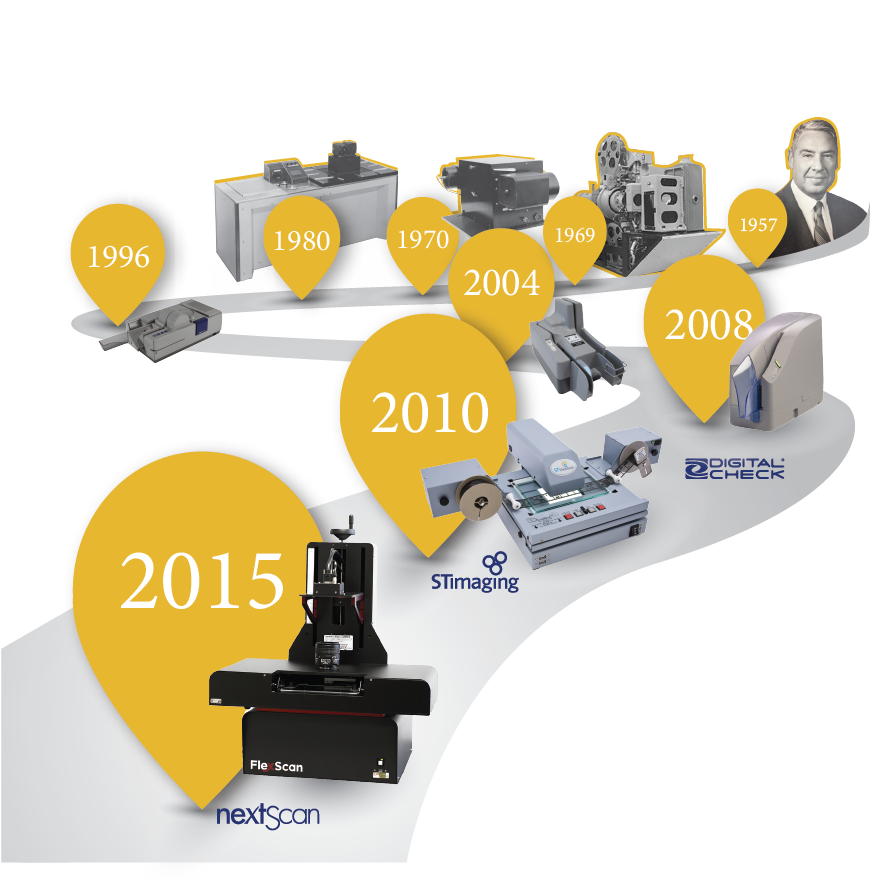 If you’ve been in the microfilm business for a while, there’s a good chance you’ve come across a machine with an ST Imaging or nextScan logo on the front. nextScan and our sister companies are known today for digital microfilm and fiche technology – ST Imaging as the maker of devices that read it digitally; nextScan as the maker of devices that convert it to digital format permanently.

Amazingly, we used to do just the opposite. Among the first products our company ever made were storage systems for physical microfilm collections, and precision cameras for preserving analog microfilm copies of digital data. A lot of the film being viewed and converted today may have originally been created by our predecessor companies.

While there is a certain irony in selling the equipment to make microfilm from digital, and then 40 or 50 years later selling you the equipment to convert it back again, it was a long and winding journey to get here. (There was even a brief period of a few years where we were out of the microfilm business entirely.) It certainly wasn’t on purpose!

More accurately, our current digital conversion technology represents the natural progression of a company that’s been working with images and cameras for many decades, and with microfilm for most of that time. For us, that journey began all the way back in 1957, when the inspiration for our company took shape from a pack of cigarettes.

What on Earth do we mean by that? The full story, according to company legend, is this: Our founder, Thomas Anderson, Sr., was hanging out with some of his colleagues and competitors after a paper brokers’ convention in New York. One of them was showing off a product called a microfilm aperture card – ancient technology to those of us in the archiving business today, but a relatively recent development at the time.

Anderson immediately spotted a shortcoming with these early aperture cards. Although they were about as simple as it gets – a piece of cardstock providing an area for punch codes and data and another that held a cutout for a chip of film – he noticed that there was nothing protecting the film; it was left exposed to the air. Our intrepid founder asked for a pack of cigarettes from one of the other brokers, but instead of taking out a cigarette, he tore off the cellophane wrapper and fashioned a makeshift protective covering. It wasn’t long before he was off to the patent office with his new invention, which he began selling less than two years later under the name Microseal.

Those of you who have been around for a long time may remember Microseal; for 30 years from 1959-1989, we sold millions upon millions of aperture cards, microfilm and fiche jackets, and storage and organizing materials of all kinds, from our base in Zion, Illinois. It was a steady, if unglamorous, line of business for as long as people were creating new microfilm and looking for a way to organize it.

At the same time, a completely different company was working on the bleeding edge of film technology, halfway across the country in the Los Angeles area. That business, called Electro Optical Mechanics, or EOM, had started out in the ‘60s as a spinoff of the Wollensak projector company, and specialized in high-speed motors and precision optics. Eventually, circumstances would bring the two firms together, but for the time being, they were both developing the state of the art in their own respective fields.

EOM’s achievements with projectors – as well as its client list – were among the most illustrious in the world at the time. It helped develop one of the first film-based flight simulators, which was used by the U.S. Air Force, Boeing, NASA, and others. A high-speed editing projector (the kind used to sift through many reels’ worth of footage to make a final cut) was bought by some of the biggest Hollywood movie studios, and later sold by RCA throughout the industry. But it was another invention, the digital microfilm conversion camera, that would become the mainstay of EOM’s business for decades.

For those not familiar with them, a digital microfilm conversion camera is designed to do basically the opposite of what any modern microfilm device does: It takes a digital image displayed on a screen, and captures it to analog-format microfilm.

Why in the world would anyone want to do that? In today’s world, it seems like it would be counterproductive. Consider the technology available 40 or 50 years ago, though, and it begins to make a whole lot more sense.

Back in the 1970s, digital storage was more expensive and inconvenient than the alternative – far more, in fact. There was no such thing as a modern-style hard drive; what passed for mass storage were experimental appliance-sized monoliths, with capacities measured in megabytes, and price tags in the tens (or hundreds) of thousands of dollars. Magnetic tape was the most fully-developed electronic storage format of the day, but was itself neither cheap nor easy to work with.

Many companies back then found it much more convenient to archive their data onto microfilm, rather than keep it on magnetic reels. Almost any type of record, from financial and personnel data to contracts and product information, was a candidate for conversion. In order to convert the records, data from the magnetic tape would be flashed onto a CRT monitor, and a camera (made by us) would capture the image onto film. This process was repeated thousands of times, so a camera was needed that could keep up with the pace, as well as maintain the precise position of the film.

The culmination of this technology came in the mid-1970s, when we built an even more precise camera for NASA’s JPL Laboratory in Pasadena. That device, the EOM Model 505, was used to convert photographs beamed back from Venus and Mars by the Mariner and Viking probes from raw data into visible images.

That process started out similarly to the bulk data capture we had already been doing: The photographic data from the space probes would arrive as a series of 0s and 1s to NASA’s labs, where it was stored on magnetic tape. A computer would then convert that information into a digital image, which was flashed on a monitor and captured. These spectacular images, however, required film that measured nearly 5 inches per frame, and whose position had to be maintained to a precision on the order of ten-thousandths of an inch. (This was achieved with the use of a vacuum system to hold it flat). That precision was especially important when working with color photos, which would arrive in three sets of data for red, green, and blue, which were flashed sequentially to yield a composite color image. Only eight Model 505 cameras were ever made – but if you’ve seen a picture from Mars or Venus from those early space missions, there’s a good chance it was captured on one of them!

As you are well aware, those days didn’t last forever. Soon, the rise of PCs and cheap digital storage would change how microfilm was used, as well as drastically altering the kinds of camera and image technology that were in use. Those changes would eventually bring Microseal and EOM together to form a new company that branched off in exciting new directions – but never too far from its roots.

Read the Rest of the Digital Check Story...

Beginning in 1998, with only five employees, FamilySearch set out to digitize their microfilm collection, which was estimated to take 50 years. At that time,