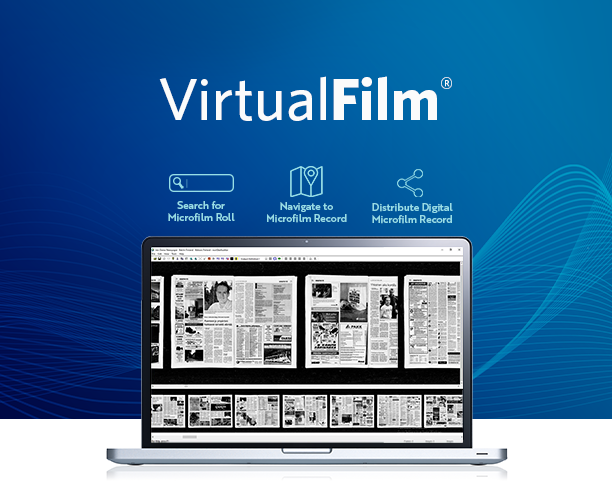 Virtual Film (VF) Digital Microfilm Archive  is a method for inexpensively converting Microfilm to a digital format that can be viewed at any PC workstation, desktop or laptop computer. The film is indexed by the label on the box of film or title bar on fiche, and retrieved similar to using a conventional Microfilm Reader/Printer. Individual images or documents do not necessarily need frame detection or indexing. Within the VF environment, individual images can be Output, Emailed or Printed. VF can also be a stepping stone to a full scale conversion, whereby the film is preserved now by conversion to a digital format, and can later be output to any document management system.

A significant advantage of VF is that the end customer can use existing in-house personnel to perform the indexing of the individual images and documents over time. These documents can then be output to an Enterprise Content Management system or Document Management System such as LaserFiche®, FileNet® or various other SharePoint products.

Conventional Film Scanning is too expensive.

There are massive amounts of microfilm that must be scanned at some point. All government records prior to about 1990 are on microfilm. Court documents that are pre-1990’s for Superior, State, Federal and all appellate courts are largely still on microfilm. Most university libraries and large city libraries still use microfilm today. McGill University in Montreal uses approximately 40 Reader/Printers to access their collections of microfilm. The University of California at Berkeley just purchased over 30 ScanPro 2000’s for access to their collections. Archives like the Library of Congress, and the National Archives in over 50 different countries still have massive amounts of microfilm. The US Department of Treasury is currently converting 1.3 million rolls of savings bonds to a digital format and storing them using nextScan’s VF archive software. The Environmental Protection Agency has even more film. Additional markets such as Healthcare, Insurance, and large corporations have film Archives that would benefit from permanent conversion to a readable digital format.

With 100’s of millions of rolls of film that need to be converted, the question is, when does the intrinsic value, (including the potential for loss of readability of the film), exceed the cost to convert to digital? Up until now, the cost of high volume conversion has been $40+ per roll, and for small collections of film, the cost has been as much as $150+ per roll.

What price is put on historical data that is being destroyed by day-to-day usage and deterioration of the film? Making a quality duplicate of the film might be a solution for short term preservation, but wouldn’t it be nice to be able to convert to digital, for less than the price of that duplicate.

Many organizations are spending budget dollars on repair of old Reader / Printers or purchasing On-Demand Digital Scanners, but in the end they still have the film, and the film is still deteriorating due to usage, walk-outs, misfiling and catastrophes.

Virtual Film is the Solution:

The primary cost of traditional scanning solutions which import film images into traditional ECM/DMS systems is the indexing. The cost to generate a few keystrokes for each page or document on a roll of film can take 20 minutes or more depending on the content.

In VF you do not need to create individual page indexes or even need frames to be detected. VF has an Analog Viewer that allows you to browse a roll of film exactly the same as a conventional microfilm reader/printer.

Another obvious source of conversion cost is slow scanners. nextScan has pioneered the modern high speed film scanner. We have scanners capable of 1000’s of pages per minute. The Eclipse 1000 can scan a roll of film at 24x reduction ratio film and 200dpi in just over 2 minutes. The reality is that most projects will probably be scanned at 300dpi, and in a normal “government day shift”, the Eclipse 1000 can scan about 70 rolls of film.

With VF every step of the scanning process has been optimized to overlap tasks for maximum effectiveness and operator utilization. One nextScan client using VF technology is currently running 3 shifts per day averaging 250 rolls per day scanned. Another source of cost in actual production scanning, is wasted operator time and storage costs.

Preservation of Film is a huge concern for Archivists and Record Managers. Every time film is used it gets damaged, and a little less of the history is preserved. For older film, Vinegar Syndrome can damage the film irreversibly and completely erode the image. This is only present on Acetate film, but if present, it must be converted immediately to preserve theim- ages.

Because the conversion cost to VF is so low, organizations can prevent the further degradation of their film stores now. VF can bring effi ciency to an organizations records management area through minimizing costs of storage and labor and also greatly reduces retrieval time.

What You Can Expect

VF is a huge savings to the end user in time and costs. Film is preserved capturing the fidelity and highest image quality available from the film today. It also keeps the indexes and film libraries from falling into disarray. In many archival or library environments, record keeping employees may be the keepers of the key on how to find required documents on film and the quirkiness of an organizations indexes over time. There is a risk of this “un-documented” knowledge being lost should those employees leave or retire. VF will safeguard organizations from these internal process challenges.

With a conventional microfilm library, finding the desired document requires the following steps:

The above system can be error prone and will cause usage damage to the film. It also adds the possibility of the film being misfiled or lost or in the case of public access, walk-outs.

With nextScan’s VF you enter the index information in the Viewer and the roll/fiche is immediately displayed. If you know the exact frame, you can also enter the frame number or folder/document/page in the Digital Viewer and the page is instantly displayed. If you are searching and only know the approximate location on the roll you can instantly scroll to that area and display the associated pages. At any time during this process, you can go to the Analog Viewer mode and scroll through the film just as if you were sitting at a conventional reader/printer.

All you need for film scanning hardware is a nextScan scanner and the NextStar Plus software release. The steps for creating a Virtual Film Archive are as follows:

The database is relatively small, but the scanned film data can be 1 to 4 gigabytes for a typical roll of film at 300 dpi. Depending on the user’s requirements, scanned film data can be stored on a SAN (Storage Area Network), Cloud-based solution, or for small collections simply on a local hard drive or external USB drive(s). nextScan can also provide a Ribbon Storage Device (RSD) to hold the database and scanned data directly. These RDS can vary in size from 8 Terabytes to 32 Terabytes. There are operational advantages to having an RSD available at scan time. 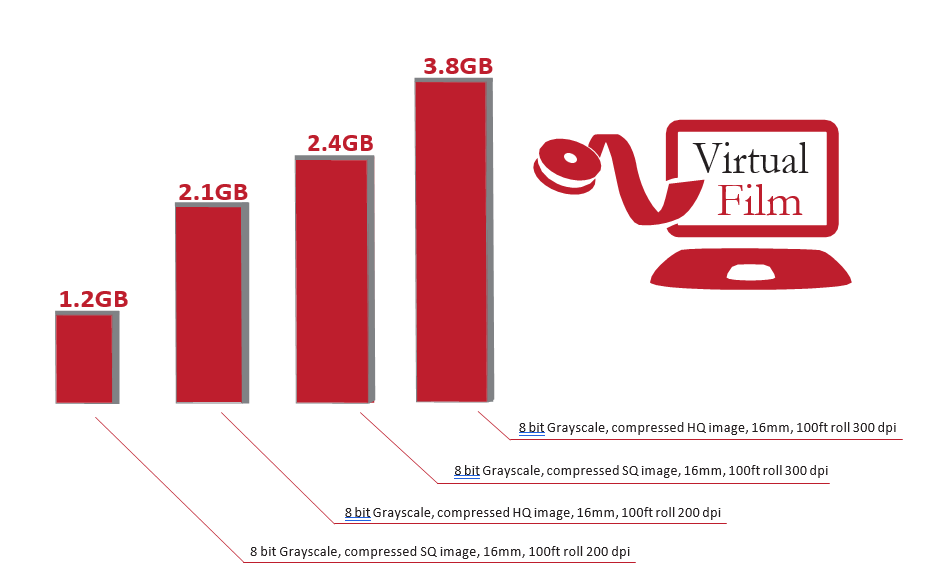 Costs to get into the Virtual Film Service Bureau business:

VF software was specifically designed to work with nextScan scanners. You will need to have a nextScan Film scanner to creat VF compatible ribbon files. There are several options here. If you already have a nextScan scanner, you will need the NextStar Plus software release. The Plus version of NextStar has the needed tools to create compressed Ribbon files, which are used in VF. nextScan also offers a scanner rental/lease program. The following is a breakdown of costs that can be expected.

How Do You Get Into This Business?

nextScan will help you all the way! We want you to succeed with VirtualFilm and will gladly provide support to your service organization through your first few installations to make sure they are successful.