The Republic of Tartarstan is the economic and cultural subject of the Russian Federation located at the confluence of two great Russian rivers, Volga and Kama. It’s capital city Kazan is over 1,000 years old making it one of Russia’s oldest and most historically entrenched cities. Historical and geographical factors attracted two major ancient civilizations to this region resulting in the large, diverse, and culturally wealthy population we know of today. Tatarstan is perhaps one of the most culturally distinct and fascinating regions within the Russian Federation. Kazan is a place where major religions co-exists and over 100 ethnic groups live harmoniously. The history of human settlement in the territory dates to the 8th century B.C. and records retention of delicate historical artifacts on microforms predates the era of the 1960’s.

After several strenuous efforts made to convert media into digital forms the sluggish conversion process prompted the committee of the State Archive of Tatarstan to make the decision to invest in nextScan’s production grade conversion solutions. The microfilm collection consists of over 7 million frames ingrained with valuable historical data that has since been made accessible to researchers and the public.

The Archive’s objective is to create a digital blockchain platform for knowledge sharing so that future generations and researchers can enjoy access to historical archival documents that share important stories about the origins of Tartarstan. Using nextScan’s preservation grade microform conversion scanners, the state archive was able to maximize workflow productivity and digitize millions of individual frames for researchers and future generations to enjoy.

With the emergence of heavy marketing movements in the microform industry through the 1950’s and 1960’s, the State Archive of Tartarstan like many other government agencies, adapted record retention methods to reflect the widespread solution to meet their preservation and storage needs. Microforms were recognized by libraries and archival entities as a viable alternative that frees filing space for productive use by condensing millions of records into single film files.

“We have accumulated over 7 million frames of historical data stored on microfilm and microfiche. An analysis and performance calculation of the microform collection drove a need for the most modern and technically fine-tuned microform scanning technology available in the market.

Prior to obtaining nextScan’s Eclipse and FlexScan Scanners we faced many challenges with existing rudimentary scanners. When film or fiche was exposed to vibration or external illumination in other scanners the output yielded poor image quality causing difficulty to achieve timely project end goals. Other scanners produced poor image quality and opted recurring needs for rescans. The frequent scanning errors caused disturbances that considerably declined our productivity levels.

In 2017, we purchased Eclipse and FlexScan scanners that are still being actively used by the employees of the State Archive for the digitization of microforms. The one of a kind scanners have provided a simple resolution for our organization by delivering high-quality high-performance digitization solutions.”

nextScan’s expert engineers have designed scanners with reliable preservation grade hardware, fastest conversion speed capabilities, highest productivity ratings, and best image quality available to end users. Our objective when designing our conversion units is to ensure that our customers receive a complete and hassle-free digitization experience free from the challenges referenced above.

nextScan’s patented anti-tension film transport ensures linearity and eliminates image distortion due to environmental vibration. This patented technology gently regulates film between the intake and out take spools while allowing for optimal transport speeds of up to 2,000 ppm. This unique scanner feature is favored among nextScan’s clientele for being ideal in its ability to maintain the integrity of their delicate film while scanning at optimal rates.

“The need for rescanning was completely eliminated and the Eclipse and FlexScan scanners deliver maximized file processing performance by offering the option to organize and execute up to 5 jobs concurrently.”

Not only do nextScan products eliminate the need for rescans but the NextStarPlus workflow software is unmatched in the industry. The Ribbon Scanning software guarantees image capture and detection from top to bottom, end to end. This software, unlike any other on the market, allows for overlapped functionality to increase workflow efficiency. End users can scan, audit, and output simultaneously. Software licenses come with 5 standard audit workstations to maximize workflow and file processing performance. This unique feature aided the State Archive of Tartarstan in meeting their conversion project’s time sensitive goals:

Pioneering a Wealth of Knowledge through Decentralized Technology

As pioneers of multiculturism and diversity the State Archive of the Republic of Tartarstan has made great strides in their goal to create a digital blockchain platform for knowledge sharing. As the world moves into a new digital era, the State Archive can safeguard access to historical archival documents. Using nextScan’s preservation grade microform scanners, the State Archive was able to maximize workflow efficiency and digitize 7 million individual frames for researchers and future generations. These frames share significant facts about the historical and cultural origins of Tartarstan and are forever a gem to the people of Tartar and to the world.

A press release dated October 2017 by the State Committee for Archives of the Republic of Tartarstan has announced plans to transfer its state archives to Blockchain. This platform for knowledge sharing is rendering Russia’s plans to enter the era of a single digital space, to transform the awareness of society and transition to a super national level.

nextScan is a global leader in cutting edge technology for the micrographics conversion and document management industry. Incorporated in 2002, nextScan was established to give the microfilm and microfiche conversion market a high-performance alternative to existing technologies. Today, nextScan equipment installations can be found in over 45 countries worldwide. nextScan’s innovative patented products are designed and built with simplicity and functionality to increase user production and lower overall costs for scanning film and fiche.

nextScan’s industry leading scanning technology has allowed the company to develop the highest speed production scanner and the most sophisticated workflow software application for microfilm and microfiche conversion in the government, corporate, service bureau and archival industries. By combining resources and technology, nextScan and ST Imaging are able to offer the fasted conversion speeds and feature rich imaging software to all segments of the micrographic marketplace. nextScan products are designed with cutting edge components – the latest in cameras, LED stroboscopic lighting, image correction, and workflow software. NextStarPLUS ribbon scanning software, now featuring redaction and OCR, along with nextScan’s Virtual Film and FicheStar software dramatically reduce conversion time and project costs. nextScan
products provide a full conversion solution that far exceeds the speed, functionality and return on investment when compared to other scanners in the market. 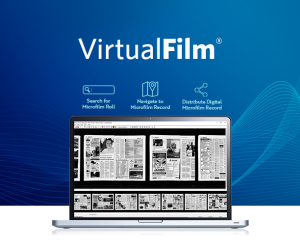